A ballistic missile attack is chaotic. In a raid scenario, dozens of these weapons can approach from all directions, traveling at supersonic and even hypersonic speeds. Adversaries can mask them, making them look like something else, all while using electronic warfare to trick the target’s defenses.

Stopping those attacks is no small task, and it starts with a powerful radar. Or, in this case, two: the AN/FPS-132 Upgraded Early Warning Radar (UEWR), which casts a wide-area net, and the Army Navy/ Transportable Radar Surveillance and Control Model 2 (AN/TPY-2) Radar, which delivers the most precise discrimination possible. Both are built by Raytheon Missiles & Defense, a Raytheon Technologies business.

“They work very well independently. That’s been proven over many years. What we're talking about now is a tight coupling of these two radars,” said Joe Preiss, technical director for the Strategic Missile Defense area of Raytheon Missiles & Defense, a business of Raytheon Technologies. “Using both radars takes full advantage of the differences in them in terms of where and how they detect objects. That combination delivers more robust detection and resilience, particularly in environments where there may be issues in seeing and identifying the threat.”

“The numbers of missiles are increasing substantially and they’re becoming more sophisticated,” said Bill Marcley, senior director of sensors and systems in the Air Power area of Raytheon Missiles & Defense. “So, you need radars that are operational and sensing all the time, capable of handling many threatening tracks at various ranges.”

That’s especially crucial when an adversary can mask its missiles or make them look like something else at the same time as they’re trying to desensitize your radar with electronic warfare. All this, as the attacker is sending a large raid size of ballistic missiles your way. How do you stop these threats in their tracks as promptly and as accurately as possible?

The thing about ballistic missile attacks is they can come from anywhere—from land, air, sea and even from submarines. Some stay within Earth’s atmosphere. Others hurtle through space. What that all means is that defensive radars must keep 360-degree watch all day, every day.

UEWR and AN/TPY-2 cover the entire field. These radars are like teammates in a soccer match, both available and ready to stop the opponent from advancing. 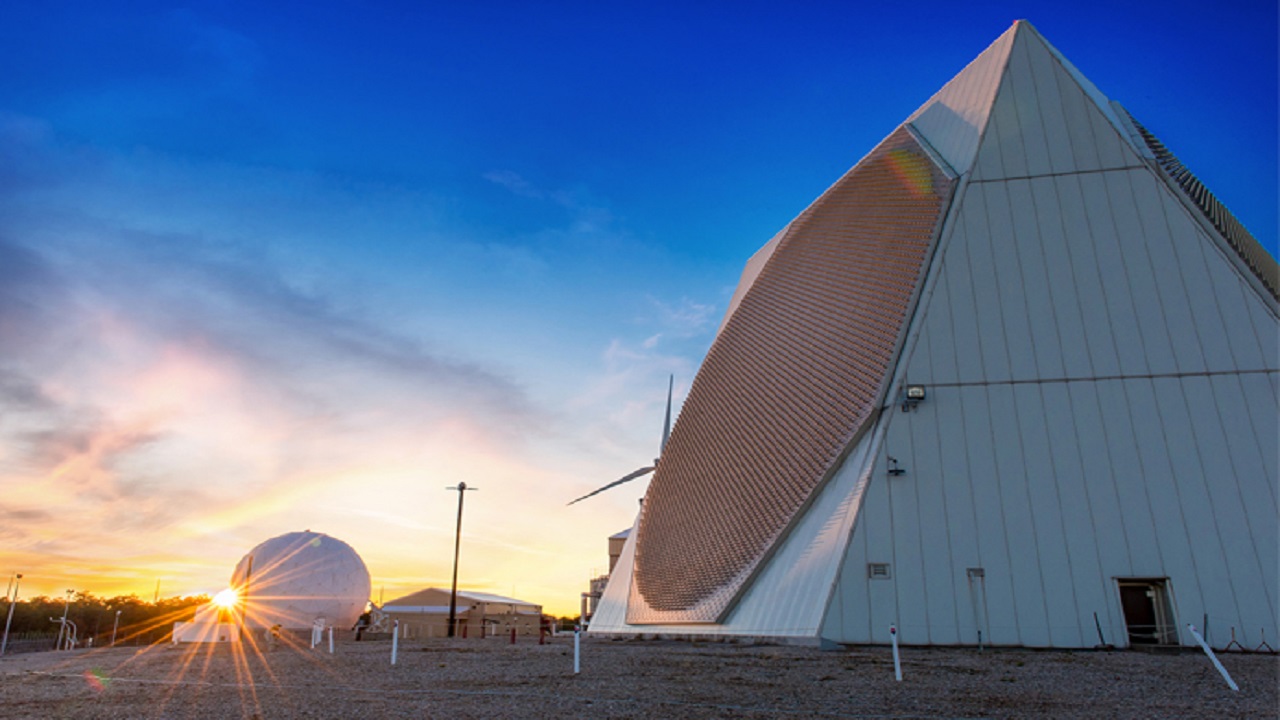 The Upgraded Early Warning Radar system searches a wide area of sky at vast distances and beyond the atmosphere. It is as big as a 10-storey building and stays in one place as it also supports the intercepts of threatening ballistic missiles far from their intended targets. [Image: Raytheon]

UEWR uses the ultra-high frequency band, or UHF, and has the longer range of the two, with the ability to track missiles beyond 5,000 km—outside the atmosphere and, most importantly, far from wherever the attack is headed. It provides early detection and precise tracking of incoming attacks, and it also classifies space objects, meaning it can distinguish quickly between a threat and a non-threat. That’s why it’s known as “the big eye, always watching.”

AN/TPY-2 operates in the X-band of the electromagnetic spectrum and, at closer range, it detects, tracks and discriminates ballistic missiles as they rise and descend. This radar’s use of the X-band, with its shorter wavelengths, allows for precision tracking and discrimination. That’s how AN/TPY-2 can see targets extremely clearly and also distinguish between an actual menace and non-threats, such as launch debris. 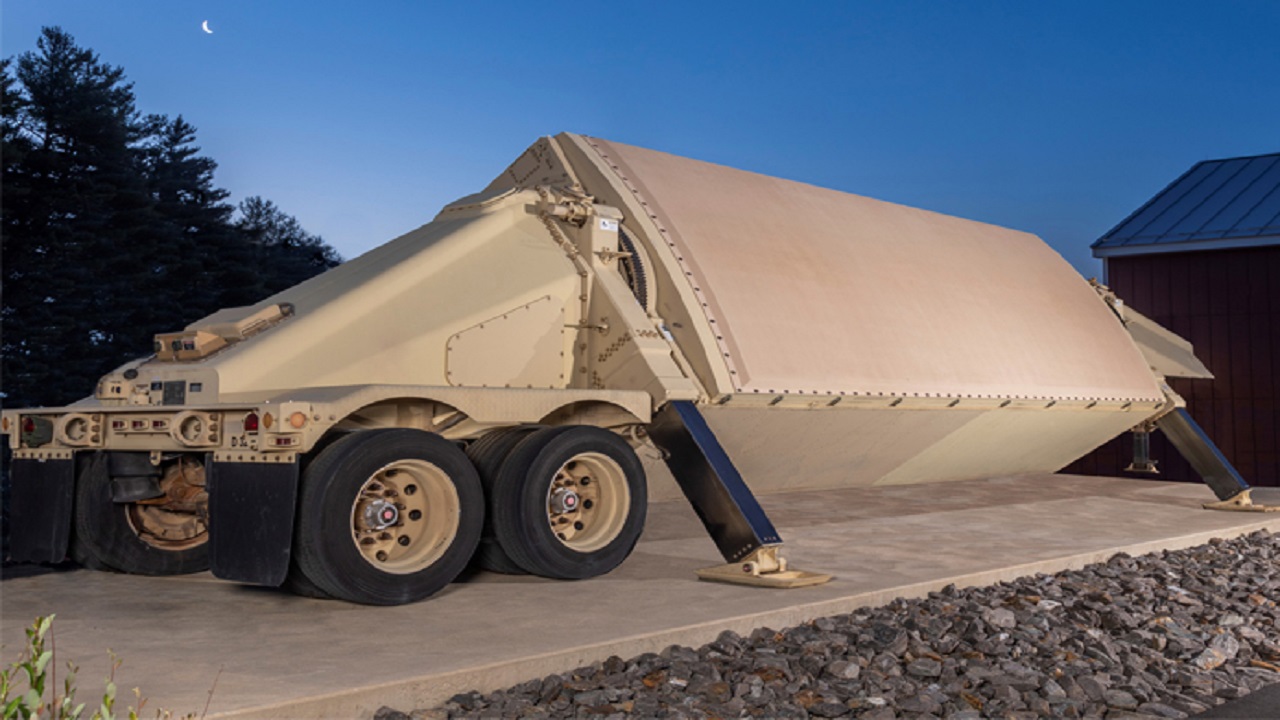 The Army Navy/ Transportable Radar Surveillance and Control Model 2 Radar is the size of a tractor-trailer and transportable by air, ship and truck. AN/TPY-2 detects ballistic missiles at closer range than UEWR and also helps guide interceptors toward a descending missile to defeat the threat. [Image: Raytheon]

Both radars are resistant to jamming and they integrate well with other capabilities, such as Terminal High Altitude Area Defense (THAAD) and Global Patriot Solutions systems. They are “more of a system of systems than one system with two radars: always there, always helping other systems know where to look,” said Jennifer Woertz, manager of program contracts for Raytheon Missiles & Defense.

AN/TPY-2 and UEWR are the only systems that have been fielded and are in operation right now. Other potential options are still in the development phase and are designed to run on a single frequency. So, another reason it’s a good idea to have two radars for ballistic missile defense is that one radar—even the best out there—is rarely enough.

“A lone radar approach is inherently problematic,” said Chris Salini, technical director of strategic sensor systems at Raytheon Missiles & Defense. “When you think of just one product trying to achieve the same goals as AN/TPY-2, which is designed with high frequency to optimize track and discrimination, and UEWR, on the low frequency to optimize early warning surveillance, you’d find a single mid-band radar falling somewhere in the middle in terms of overall performance.”

AN/TPY-2 and UEWR are key sensors in the Missile Defense Agency’s (MDA) Missile Defense System. “Data from these radars is collected through the MDA’s Command and Control, Battle Management and Communications system,” Marcley explained. “The MDA uses that information, providing it to effectors to intercept and engage targets. The agency has done many integrated ground and flight tests of these systems that have been fielded over several decades, resulting in successful track records against all classes of ballistic missiles.”

Meanwhile, as the MDA uses the data from AN/TPY-2 and UEWR, Raytheon Missiles & Defense continues to keep these assets ahead of evolving threats through constant system monitoring, sustainment and modernization.

The bottom line, said Woertz, “is that you’re always getting the best surveillance and the best discrimination working together. Anything else is a compromise.”

Stay up to date

Could Embraer’s C-390 be Saudi’s transporter of delight?

What chance does Embraer’s C-390 tactical transport have of replacing at least part of Saudi Arabia’s large, but ageing fleet of C-130 Hercules?

Aviation, defence and space news from the Middle East, Africa and South Asia